The Theakstons Crime Writing Festival is the largest event in Europe dedicated to the celebration of crime fiction. The Theakstons Festival crew had been tweeting us all up into a fervour for the past few months…and now finally it was happening and I was going.

As I stepped from the train onto the station platform at Harrogate my old Dutch mate from last year’s Theakstons Crime Festival Bo de O’Utline greeted me with a cheery wave.

But there wasn’t much time to hang around and catch up on crimes past. It was full steam ahead for the Old Swan Hotel and the Theakstons Old Peculier Crime Novel of the Year Award. The awards were hosted by the ever loquacious and always amusing Mark Lawson. We were introduced to a stellar (with apologies to Peter Theakston that’s stellar not Stella) line up of nominees with Mark Billingham kicking off the proceedings. But in the tried and tested tradition of classic crime writing I’m going to make you wait to discover who this year’s successful criminal mastermind was. 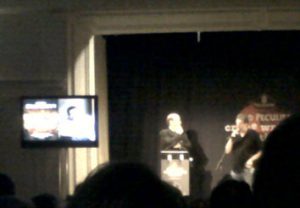 Next up was an award to PD James of an Outstanding Contribution to Crime Fiction Award. Mark Lawson and Val McDermid both sang the praises of the woman who Val fittingly described as the ‘Queen Mum’ of crime fiction. But no one could be left in any doubt that everyone in the packed-to-capacity room shared their regard for this icon of crime writing when her appearance on stage was greeted with a prolonged and heart-felt standing ovation. There was barely a dry eye in the house.

But my personal stand-out moment of the Festival came as the room began to empty, when Val McDermid attempting to clear a path through the still buzzing audience to enable PD James to leave, flung her arms wide and uttered the phrase every crime writer must one day dream of hearing, ‘Legend coming through!’ 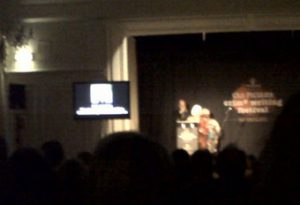 David Jackson aka @Author_Dave, me aka @nic_ford, Pam Reader aka @Pamreader, Mel Sherratt aka @writermels, Rebecca Bradley aka @RebeccaJBradley.
Missing in frantic action, doing a great job taking snaps and notes are Maria Barrett aka @MariaBarrett and Keith Walters aka @keithbwalters.

Harrogate is a fabulous setting for the Festival. The old time elegance of its architecture and the presence of possibly the best tea rooms in the world in the shape of Bettys only add to the relaxed and leisurely ambience. The choice of the Old Swan Hotel, itself once at the centre of perhaps the greatest of all crime mysteries – the disappearance of Agatha Christie- as the new venue for the Festival was both inspired and inspiring.

Friday night was just as star studded as the preceding evening with the charmingly suave Peter James, this year’s Chair of the Crime Writer’s Association, acting as our host for a gala reception in which the winners of five of the CWA Daggers & the nominees for the Specsavers Crime Thriller Awards were revealed.

Whether you’re a writer (published or aspiring), a crime fiction fan, a publisher or an agent Harrogate in July is the place to be. Where else would I have had the opportunity to chat with everyone from exciting new authors like Dave Jackson to international bestsellers like Peter James; meet top agents like Carole Blake and Jane Gregory or brush shoulders with crime fiction luminaries like Stuart MacBride and Lee Child. Oh yes that reminds me, Lee Child: the winner of this year’s Theakstons Old Peculier Crime Novel of the Year. 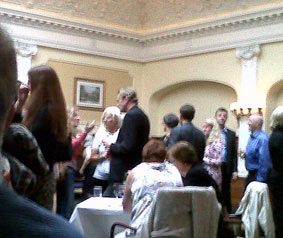 Next year I hope to catch up with another of crime fiction’s rising stars Mari Hannah, we promised to meet up…but fortune decided otherwise! I hope we’ll always have Harrogate and Theakstons Crime Festival…