The Theakstons Harrogate Crime Writing Festival is the largest event in Europe dedicated to the celebration of crime fiction. With over 70 best-selling UK and international crime writers and a programme of 20 plus events it’s no surprise that over the last seven years it’s become the place to be for lovers of crime fiction. This year has proved no exception with over 8,000 tickets sold and I wanted to go…

…but I had to work! Then fate intervened, a meeting was cancelled and I arranged to have Thursday and Friday free. I still couldn’t make the Saturday Quiz night or the tweetup arranged by @crimeficreader because weekend work in the form of the Festival of British Archaeology called. But being a glass half-full kind of a girl I decided to head north by train to start my investigation into Yorkshire’s criminal inclinations anyway.

As soon as I stepped down onto the station platform at Harrogate the presence of a criminal element was in evidence!

Despite mixed reviews about its quality I’d decided to risk booking in at the St. George Hotel and Spa. My single room was clean, acceptable and cheap. And just as importantly the imposing old building that is the Crown Hotel (the conference venue) was only five minutes walk away. Perfect!


After a shower and change of clothes I headed off to the Crown. The bar was already awash with crime fiction fans, authors, literary agents and publishers. And if I had any lingering doubts that this was the place to be they were dispelled when I met first Val McDermid and later Peter James. The main event of the evening was the Theakstons Old Peculier Crime Novel of the Year Award, won this year by R.J. Ellory for A Simple Act of Violence. But fine though Ellory’s writing is, for me he was upstaged by the understated eloquence of Reginald Hill (who received a life-time achievement award) and the power of divination of our host Mark Lawson’s Jack Russell. Forget Paul the psychic octopus if you want to predict the result of next year’s TOP Crime Novel of the Year what you need is a Jack Russell.

Next morning well breakfasted and with time to kill before my selected session of the morning I headed out into the bright sunshine to enjoy a long relaxing cup of tea in that most deservedly enduring of Yorkshire institutions Bettys Tea Rooms.


Suitably refreshed I headed back to pick up my ticket for Knitting Needles at Dawn. With the charming and urbane Simon Brett in charge it was no surprise that the diverse authorial talents of MC Beaton, Tony Black, Simon Kernick and LC Tyler entirely failed to come to blows in this ‘cosy versus noir’ debate. But they did provide an hour of entertaining insight into how they viewed their chosen genre.

The white blur centre stage is all my camera phone could pick out of them! 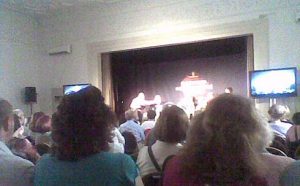 I left Harrogate thoroughly satisfied with my decision to trek north and with every intention of being back for more next year. Beat that for a long weekend: two Festivals, Val McDermid, Peter James, tea at Betty’s and a psychic Jack Russell.